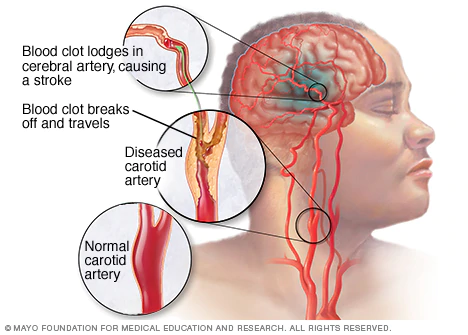 Stroke is a disease that affects the arteries leading to and within the brain. It is the No. 5 cause of death and a leading cause of disability in the United States. A stroke occurs when a blood vessel that carries oxygen and nutrients to the brain is either blocked by a clot or bursts or ruptures.
The three main types of stroke are:

Transient ischemic attack (a warning or “mini-stroke”)- is different from the major types of stroke because blood flow to the brain is blocked for only a short time—usually no more than 5 minutes. A TIA is a warning sign of a future stroke. A TIA is a medical emergency, just like a major stroke. Strokes and TIAs require emergency care. Call 9-1-1 right away if you feel signs of a stroke or see symptoms in someone around you. There is no way to know in the beginning whether symptoms are from a TIA or from a major type of stroke.
Like ischemic strokes, blood clots often cause TIAs. More than a third of people who have a TIA and don’t get treatment have a major stroke within 1 year. As many as 10% to 15% of people will have a major stroke within 3 months of a TIA.

Strokes doesn’t occur only in senior years, middle aged and younger people are having strokes, frequently. A family history of strokes, and the African American population may have greater risks.

Here are some ways to reduce the risks of strokes: