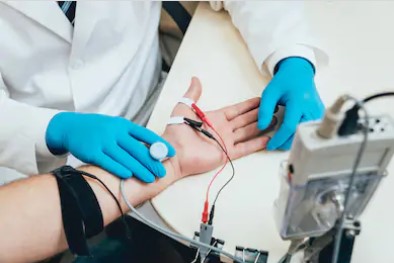 Electromyography, or EMG, is used to diagnose nerve and muscle dysfunction and spinal cord disease. It records the electrical activity from the brain and/or spinal cord to a peripheral nerve root (found in the arms and legs) that controls muscles during contraction and at rest.

During an EMG, very fine wire electrodes are inserted into a muscle to assess changes in electrical voltage that occur during movement and when the muscle is at rest. The electrodes are attached through a series of wires to a recording instrument. Testing usually takes place at a testing facility and lasts about an hour but may take longer, depending on the number of muscles and nerves to be tested. Most patients find this test to be somewhat uncomfortable.

An EMG is usually done in conjunction with a nerve conduction velocity (NCV) test, which measures electrical energy by assessing the nerve’s ability to send a signal. This two-part test is conducted most often in a hospital. A technician tapes two sets of flat electrodes on the skin over the muscles. The first set of electrodes is used to send small pulses of electricity (similar to the sensation of static electricity) to stimulate the nerve that directs a particular muscle. The second set of electrodes transmits the responding electrical signal to a recording machine. The physician then reviews the response to verify any nerve damage or muscle disease. Patients who are preparing to take an EMG or NCV test may be asked to avoid caffeine and not smoke for 2 to 3 hours prior to the test, as well as to avoid aspirin and non-steroidal anti-inflammatory drugs for 24 hours before the EMG. There is no discomfort or risk associated with this test.