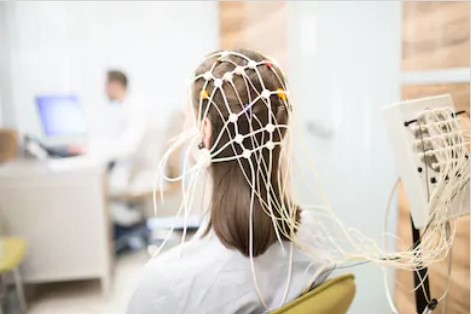 Electroencephalography, or EEG, monitors brain activity through the skull. EEG is used to help diagnose certain seizure disorders, brain tumors, brain damage from head injuries, inflammation of the brain and/or spinal cord, alcoholism, certain psychiatric disorders, and metabolic and degenerative disorders that affect the brain. EEGs are also used to evaluate sleep disorders, monitor brain activity when a patient has been fully anesthetized or loses consciousness, and confirm brain death.

This painless, risk-free test can be performed in a doctor’s office or at a hospital or testing facility. Prior to taking an EEG, the person must avoid caffeine intake and prescription drugs that affect the nervous system. A series of cup-like electrodes are attached to the patient’s scalp, either with a special conducting paste or with extremely fine needles. The electrodes (also called leads) are small devices that are attached to wires and carry the electrical energy of the brain to a machine for reading. A very low electrical current is sent through the electrodes and the baseline brain energy is recorded. Patients are then exposed to a variety of external stimuli—including bright or flashing light, noise or certain drugs—or are asked to open and close the eyes, or to change breathing patterns. The electrodes transmit the resulting changes in brain wave patterns. Since movement and nervousness can change brain wave patterns, patients usually recline in a chair or on a bed during the test, which takes up to an hour. Testing for certain disorders requires performing an EEG during sleep, which takes at least 3 hours. In order to learn more about brain wave activity, electrodes may be inserted through a surgical opening in the skull and into the brain to reduce signal interference from the skull.